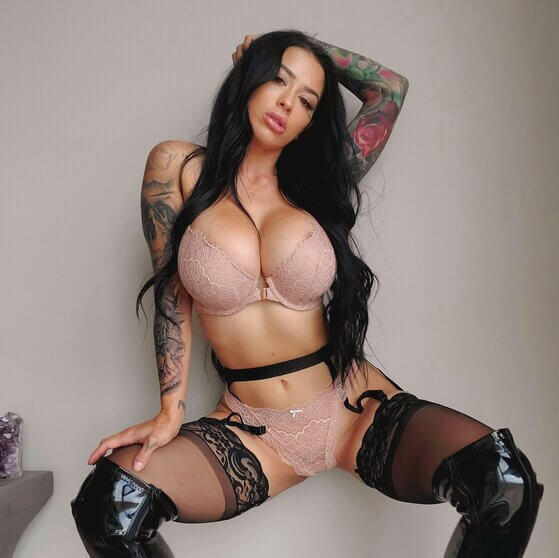 Katrina Jade is an American pornographic actress that born on October 31, 1991, Katrina has used her talents as an adult film actress, adult model, webcam model, and Stripper to accumulate a net worth that is believed to be over 1 million dollars.

This American beauty grew up in the Mojave Desert area of Southern California.

With a wide range of ethnic heritage, Jade has ancestry in Italy, Hawaii, Germany, Native America, Mexico, Ireland, and the Netherlands.

At just 29 years of age, pornographic actress, Katrina Jade has one child and his the wife of Nigel Dictator since 2013.

Her black hair and dark brown eyes provide her with a look that screams excellently experienced.

Being 5 feet and 3 inches, anyone would wonder how she has been able to effortlessly manage her 30G bust size.

Her slim frame which weighs under 130 lbs seems athletically build to carry around those huge knockers.

It doesn’t matter how she does it but the fact that she has been able through her career to create financial security for her family.

Another aspect of her body that adds to her attractiveness is her tattoos.

She has what appears to be a star inked under her left eye and a cobweb on the right side of the face.

The word “blessed” on her right wrist and the infamous “Daddy’s girl” tattoo right above her luscious pussy completes the list.

What’s more seductive than her pierced nipples that give her a hardcore edge as it is coupled with brown hair and brown eyes?

She has also pierced her clit and navel and has had dermal implants in her abdomen and on her chest, just below the neck.

Before she decided to grace the world with her tantalizing sexual images and performances, Katrina was a sales associate working at Circuit City.

Sources also state that she also was a hairdresser. She started her road to stardom by applying to kink.com where she made her debut aided by her husband.

She was 23 when she achieved this big break and ever since she has been able to work with the likes of HardX, Hustle, Dogfart Network, Bang Bros, High Mile, Wicked Pictures, Girlfriend Fling, Jules Jordan, Reality King, and many others.

The list of films or videos she is featured in is quite long but some of her memorable performances include:

She also won Spank Bank Awards. Then in 2016, she won a Spank Bank Technical Awards for Happily Married Slut Wife and Totally Un-Trollable and went on to win in the categories of Best Trash Talker and World’s Greatest (and Sexiest) Villain the following year.

In 2017, she went home the winner for the Gloryhole Guru of the Year category.

She is believed to be bisexual because she has performed in sexual scenes with both males and females.

In an interview with barelist.com, she explained the experiences she had in the adult industry and lessons she learned, saying “Stay professional, be on top of your game, have good representation, stay clean, responsible, reliable, and respectful. And don’t be an asshole, stay away from drugs and drama. (neither of which I have ever had any interest in).”

All Orders Will Be Ship Out This Week. We're sorry for the delay Dismiss

Get the lates DIY Pocket Pussy