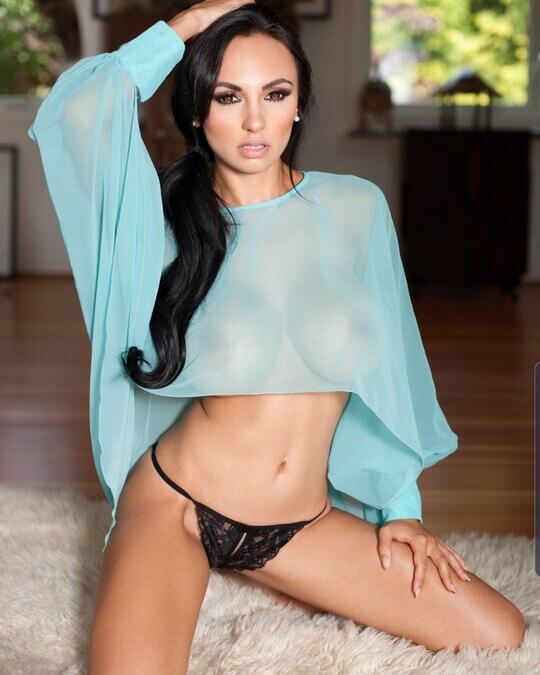 This sexy bombshell is a playmate (Miss August 2011) and has been featured on the cover of Playboy magazine.

Though she is known for her intoxicating beauty and her voluptuous body, what stands out the most is her huge breasts which have been approximated to be 30GG.

They seem to just stand out in any picture she takes, being the star of the show.

Born in Voronezh, Russia, she grew up in a small town in Feodosia, Ukraine.

Now 34 years old, her beauty and sex appeal has not faded after being featured in videos such as DJ Khalid’s I’m the One that highlights her sex appeal while riding a white horse.

Even though she now earns a very hefty income from her modeling contracts and other appearances, she is from humble beginnings.

She explained in an interview with the Sun Online that she grew up without some basic commodities such as running water, electricity, and no hot water.

She can even now vividly remember how cold it was and the many times that all she had to eat was bread. In addition, in an interview for Hers magazine, she said, “I truly experienced what it’s like to be poor and that made me want to be something—to get out, to create something…I never want to experience what I experienced in Russia again.”

Her sex appeal has been one of the greatest factors to her rise to fame on Instagram. Currently, with almost 6 million followers, her provocative posts have both men and women begging for more.

However, there is more to this beauty than what meets the eyes. She is a triple threat – beauty, brains, and most definitely body!

According to Sharp Magazine, Iryna has a master’s degree from the University of Arizona and has been known to speak three languages fluently.

She has been noted to be a total package because of her ability to use all her talents to ensure her success.

This Russian student turned model traveled to the United States at the age of 16 to study business.

However, to ensure her financial sustainability, she heeded the advice of a friend and became a ring girl.

It was this job at the World Fighting Federation MMA which ignited her modeling career. What was the next best thing for her to do?

She thought it wise to mail some of her photos to Playboy and viola, they called her to model for them just as she was pursuing her master’s degree.

Entering the modeling industry did not deter her from continuing her education. However, she admitted that this was very challenging as she aimed to balance both worlds.

Ivanova states that she vividly remembers that she had to take time off from her studies to complete the photoshoot with Playboy magazine and also the struggles of attending class after having a hectic photoshoot that ended late the previous night.

Yet, she never gave up because if modeling did not work out for her, she would always have a career to support herself.

She must be thankful for the supportive parents that she has because they always encouraged her to finish school.

With her language proficiency and her qualifications, she hopes to one day be able to have a job where she could be an interpreter.

Working with Homeland Security has still remained a dream job for her.

She has also considered working in the video game industry because of her desire to decipher the needs of the consumers based on analyzing what they would like to see released.

Maybe the consumer research department would be a great fit for her.

Iryna classifies herself as a late sleeper due to her staying up late in the night.

From 12 am to 2 am being her time when she is most creative and/or productive, she finds it difficult to awaken and function especially when she has early morning photoshoots.

No wonder she says that she likes to sleep in. She also enjoys spending time with her dog and watching Netflix.

Her dog is a Pekinese, a toy dog breed from China with a unique facial appearance. Ivanova describes both her dog and cats to have a flat looking face.

She says, “All my animals look like they ran into a wall!”

Some may say that their most treasured possessions may be their houses, vehicles, or pieces of jewelry but for this beauty, she believes that her grandmother is most precious to her because she was the one who raised her.

Iryna has stated that she can easily remember some of the great advice and life lessons that her grandmother has taught her.

Even though it is uncertain whether or not her grandmother has given her the advice that she deems best (“No matter what you’re doing or who you’re working for, be the best you can be and work your absolute hardest”), this is a piece of excellent advice to follow to achieve success.

Barns, S. (June 16, 2017). SHE’S THE ONE Model Iryna Ivanova on flirting with ‘shy’ Justin Bieber, getting naked for Playboy and her HUGE 30E boobs. Retrieved from https://www.thesun.co.uk/living/3814219/model-iryna-ivanova-on-flirting-with-shy-justin-bieber-getting-naked-for-playboy-and-her-huge-30e-boobs/.

All Orders Will Be Ship Out This Week. We're sorry for the delay Dismiss

Get the lates DIY Pocket Pussy