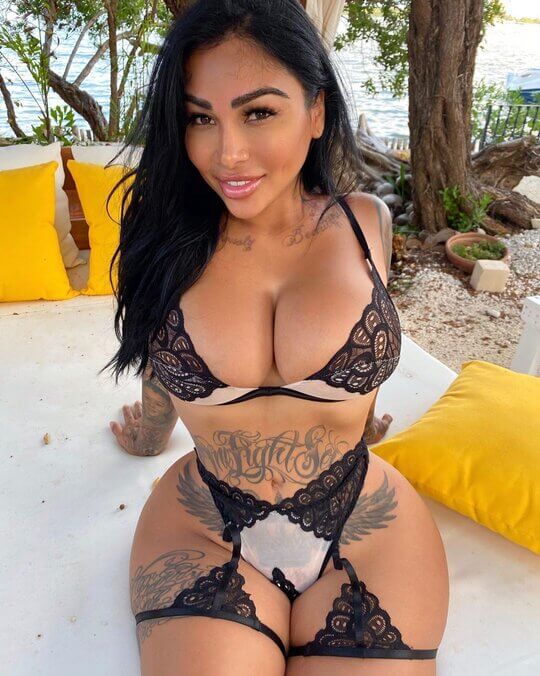 A mother and the wife of Lucky Moe Razavi, she has used her shot to stardom to create other titles for herself model, actor, and most importantly, businesswoman.

Born June 2, 1985, this 35-year-old native of Oxnard, California has not shared a great deal with her social media fans about her earlier life.

Based on an interview with Reality Tea in 2009, she shared that she was of Mexican descent. Thus, not much is known about her upbringing or her educational experience.

However, it has been stated that she comes from a big family, growing up with four brothers and one sister.

This may be where she gets her competitive spirit as with so many siblings, there must have been some competing for attention from their parents.

Numerous blog sites (such as Tvovermind ) states that her siblings helped to groom her into the woman she is today.

She says that this is especially true for her talkative nature because of the numerous topics they would discuss together.

Even though it has been reported that her father spent time in jail for an undisclosed reason, the familial bond was not broken; in fact, it grew stronger.

It was her father who insisted that as a family, they take care of each other. So, even in his absence, they looked out for and supported each other.

But it was this incident that took place when she was 15 years old which played a pivotal role in her establishing her need for independence and in part, drove her to continue striving for more success.

She has explained her struggles to her thousands of Facebook fans, sharing that even though she was hardworking at an early age (having her first job at 13), she also faced homelessness.

She claims that her strong resilience to the hardships of life is accounted to her father who she deems as her hero. There have been recent pictures with Razavi and her father on her social media accounts.

Known as Brittanya Razavi on her Instagram account, Brittanya Ocampo-Razavi is a social media personality, actress, and model who started her rise to stardom as a reality star on Brett-Michael’s “Rock of Love” series on VH1.

After her debut on the Rock of Love Bus in 2009, she went on to be featured in a number of magazines, most notably being on the cover of MMA Sports Magazine.

Other important magazines she was featured in, in the months after she left the show, include Obscene Magazine, Spire Magazine, Rebel Ink, and Tattoo Energy.

Yet, her reality show days were not over. She was also a contestant on Ricki Lake’s Charm School where it was the intention of producers to help to improve the contestants’ mannerisms, behavior, and etiquette.

With 12 other contestants, she competed for the prize of $100,000. She did not win this competition either but copped the fourth position once again.

She was also a contestant in the series I Love Money on VH1 in 2010, repping the gold team. Again, she didn’t win as she came in 6th overall.

However, it was her role in the 2012 comedy-drama film written and directed by Corey Grant, Dysfunctional Friends, which highlighted her acting skills. She starred as Lexus alongside actors such as Stacey Dash, Reagan Gomez-Preston, and Wesley Johnathan.

Other than her stint on television, her looks have been very influential in cementing her fame. Her signature features include her numerous tattoos and her dimple piercings.

What is a fact is that she easily lures the attention of both men and women with her exotic looks and the provocative pictures which she posts on her social media accounts.

Most of her pics reveal barely-there clothing that accentuates her curves, buxom bust, and does not leave much to the imagination with the imprint of her “garden of Eden.“

She is also influential in fashion as many Pinterest pages have been created featuring her fashion style which includes her clothing choices and tattoos.

It is therefore a given to state that she understands and effectively uses the power of social media to maintain and then further develop her popularity.

Trouble With the Law

Brittanya’s rise to fame was not always smooth running. She lived up to her tough and rough persona when she found herself in trouble with the law in 2010.

She was arrested and sent to prison due to being a part of a bloody brawl in 2008 after she pled guilty to a felony assault with a deadly weapon.

She also pleads guilty to the offense of misdemeanor battery. All of this stemmed from when Razavi, 25 years old at the time, used a chalice, known as a “pimp cup” to harm another woman who needed stitches after the incident.

She received a six-month sentence for the case, which she served in Ventura County Jail in California.

Though she was seen as very attractive from her debut on television, Brittanya’s appearance has not stayed the same throughout the years.

She has had her fair share of surgeries to try to achieve the body she desires. Several breast augmentations and butt jobs later, she is far from what we know her as being in 2009.

This was not something that she has hidden from her fans. She was always very open with the fact that she has always had the yearning to change the shape of her butt from “watermelon to one that is peach-shaped.”

However, despite the challenging experience she had getting her first butt implants, being unable to freely pass excrement was obviously not a deterrent to doing other procedures.

Because of the ordeal, she desired to have them even bigger and thought that getting bigger breasts will also improve her appearance.

However, through her journey to improve her looks, she has had some poor experiences. Her visit to Mexico for surgery went array due to language barriers.

What she desired was not what she received and so she ended up with botched results. It was not due to them being unable to understand what she wished for through the pictures that they were shown, but it was because of the material used in the procedure.

Instead of the expected implants, they used hydrogel to fill her butts to give her the look that she wanted.

This left her with buttocks that became more swollen and redder after some time. They even began to lose their color.

All of this was not too bad for her public image as she was featured on the television show Botched as she sought the help of Dr.

Terry Dubrow and Dr. Paul Nassif to mitigate the issue. It was on the show that she revealed that she enjoyed twerking and wanted to problem fixed as she recognized that she couldn’t twerk properly for her fans any longer.

She stated on the show which aired in April 2020 on E! that “people on social media say that wow, you have a nice butt. Too bad you don’t know how to shake it.”

Overall, the advice given was that she should not attempt any procedures to fix the problem because this may cause further complications. She accepted the risk factors and decided not to try to modify it any further.

Just like any other social media influencer or reality star with the brilliance to seize their opportunities after their rise to fame, Ocampo-Razavi had been able to also establish herself in the business world.

Claiming her desire to have varied income streams that will last after the fame of the reality shows has died down, Razavi has ventured into numerous business avenues.

According to prnewswire.com, Brittanya states: “I know I must have a look that people like and I’m successful at it, but I understand it can’t last long, so I tend to want to go in a different direction… My mind is my secret weapon. I have a lot of street smart knowledge.”

She has created a clothing brand that has over 500 stores worldwide. Being a co-owner of 187 Inc., her brand and name have become popular in countries such as Japan and Australia.

However, she has taken it one step further. The brand is also found on phone cases, shoes, and even on children’s items.

Her books “Millionaire Self Talk and “My Mind, My Secret Weapon” features her business savvy. The former is a self-help workbook and the latter a memoir.

This memoir features her own story of how she was able to start and develop her business ventures as well as values that made her entrepreneurial spirit thrive.

It reveals all about her struggles as a single mother at the age of 15 and her rise to success. This book likewise reveals that she is also an owner of a real estate investment business based in California. In addition, we can add the role of motivational speaker to her repertoire.

This 5 feet 2 inches star bright light seems that it will not fade anytime soon. Even after 11 years after coming to the entertainment scene and amassing an 8-million-dollar net worth, she still leaves her fans enthralled by all she has to offer.

Though she accepts that she may not be the smartest or the most educated, she believes that she has what it takes to continue to be successful.

Her fans on her social media pages seem to agree as they describe her as being down to earth and sweet, though she herself states that she is not at all innocent.

The millions of likes on her pictures surely proves that her popularity has not waned.

There is no certainty of what she would be doing next – more reality shows, an extension of her brand, or other body enhancement surgeries – but what is certain is that she is a prime example of how one can take an opportunity and make it into a franchise that may as well help to finance her family for the rest of their lives.

1. Mason, A. 10 Things You Didn’t Know About Brittanya O’Campo. Retrieved from https://www.tvovermind.com/brittanya-ocampo/ on October 26, 2020.